Avoid Jargon in the Presentation World

I recently read about a three-way digital marketing campaign. The people running the campaign wanted to make it simpler. This sounded like a reasonable thing to do. But, when I started looking into the details, I noticed why the message being marketed was very difficult to grasp. It was filled with buzz words, jargon, and technical language. Using these words made it very difficult for anyone to understand what they were trying to communicate. I understand that jargon makes some people’s lives easier, but does it need to be in a presentation? 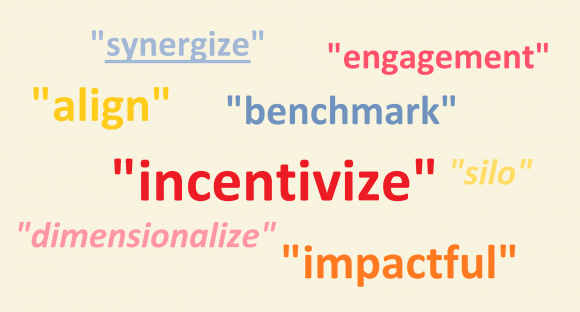 Here, you can see a list of jargon commonly found in business presentations. Many people listen to these words without really paying much attention to them. Others understand them in different ways. As a result, these words can mean different things to different people. This can often compete with the meaning that you wanted to convey and cause misunderstandings.

What Needs To Happen?

The most important thing for you as a presenter, is to communicate your message as assertively and as clearly as possible. You have audio, video, visuals, text, and your own presence to explain the message, so try to communicate it in a way that everyone can understand.

Steve Jobs had a knack for presenting technological innovations to the general public. His approach would simplify technical concepts to something that a non-savvy person could pick-up easily and without mush effort.

Some people see the use of simple language as a loss and as an excuse for not being able to use more meaningful language. It is true that we shouldn’t abandon rich vocabulary for the sake of convenience, but jargon only works if your audience is comprised of people who use these words enough to understand them and act upon them. If, however, this is not the case; then it makes much more sense to use simpler language instead.