Lists and bullet points help present related information in a concise manner. Both the Generic layouts and free custom designed themes in PowerPoint 2013 come with a placeholder for bulleted/numbered lists. Learn how to create Numbered & Bulleted Lists in PowerPoint 2013 and how to customize a bulled list in to your PowerPoint presentation with ease. 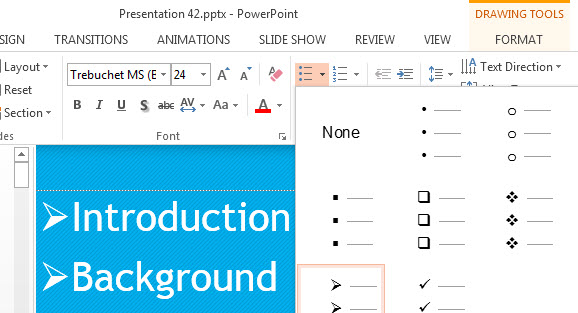 If decide whether to use a Numbered List or a Bulleted List. If the information in a presentation slide is composed of step-by-step instructions, i.e. recipe, use a numbered list. One the other hand, if the information is not arranged in a logical order, i.e. items to buy, use a bulleted list.

To apply a number or bullet, highlight the paragraph you are working on. Navigate to Home tab on the Ribbon, and click the Numbering or Bullets button in Paragraph group. The selected portion has the changes applied. The above portion shows Arrow Bullets being applied.

Keystroke shortcuts are useful while working with numbered lists. Press the <Enter> button to insert another paragraph into the slide while retaining the list level. Press <Tab> to demote the paragraph by one level. Press <Shift> + <Tab> to promote the line or paragraph. 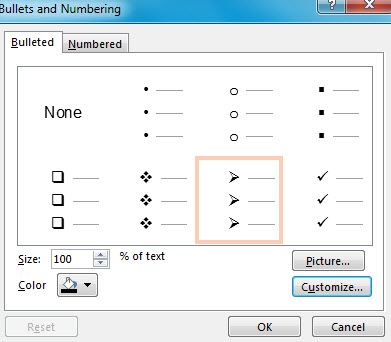 Once you click the Customize option, a Symbol dialog-box appears. Browse options, specific to a Font and its various sub-categories or subsets. You may also change the bullet color from the Color drop-down menu. Upon making a selection, click OK. 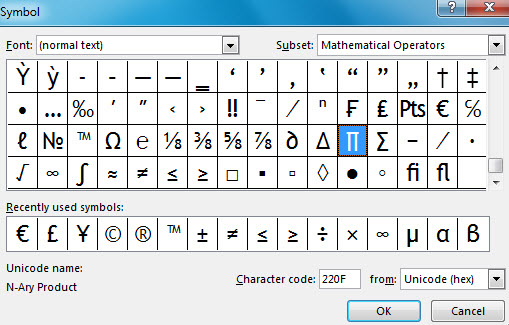 The above tutorial describes how to use Numbered & Bulleted Lists in PowerPoint 2013, and is made specifically made while keeping in mind PowerPoint 2013 users. However, the layout is similar to PowerPoint 2010 or 2007 users. Do check out ready-made free academic PPT themes.